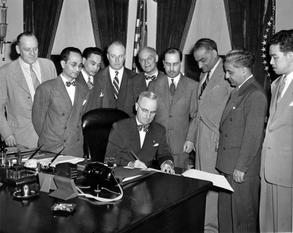 One of the most respected economists in the Philippines, Leonides S. Virata, was born in Barrio Medicion in Imus, Cavite on April 22, 1918.He obtained his law degree in 1940 and business administration degree, cum laude, in 1941, both courses from the University of the Philippines. He did graduate work at the Harvard University, the University of Chicago, and Northwestern University.Virata was in the US when the Philippine Commonwealth was evacuated to America because of the raging war in the Pacific. From 1946 to 1948, he worked as officer of the Philippine Embassy in the US.After the war, the task of directing the economic research of the newly organized Central Bank of the Philippines in 1949 fell on him. Subsequently, he was appointed as the bank’s deputy governor and, later, as a member of the Monetary Board.In various UN conferences on finance, trade, industry and economics, Virata served in different capacities: adviser to the Philippine delegate to the International Monetary Fund Conference, Washington, DC 1949; adviser, Philippine delegation to the International Monetary Fund and International Bank Conference, Paris, France, 1950;and delegate of the Philippines to the Conference of the Consultative Committee in Economic Development in Southeast Asia under the Colombo plan, Ceylon, 1957.In 1952, he left the government service and joined the Philippine American Life Insurance Company as financial vice-president and vice-chairman of its investmentcommittee. Soon, he was accorded the same respect he earned during his service in the government. He was elected either as chairman, president or board member of various companies involved in insurance, food processing, marketing, oil exploration, plywood manufacture, logging, textile, meat packing, glass making, oil refining, banking,telecommunications, etc. His leadership in business and industry reached its peak when he was elected president of the Philippine Chamber of Industries and the Management Association of the Philippines.In 1963, the Philippine Women’s University awarded him an honorary doctorate degree. In 1966, he became a member of the Joint Legislative Executive Tax Commission. From 1969 to 1970, President Marcos appointed him as Secretary of Trade and Industry. In 1970, he was appointed chairman of the Development Bank of thePhilippines. As head of the DBP, he helped agricultural and industrial enterprisesthrough sound financing schemes. He was also responsible for orienting the institutional objective of development to the countryside to insure that the rural people would enjoy the benefits of economic growth. To him was also attributed the successful transfer of theManila Electric Company to Filipino control from General Public Utilities of the United States, and the Filipinization of the Philippine Long Distance Telephone Company.Upon assuming his position as Chairman of DBP, he ordered the investigation of several major firms that failed to pay the DBP millions of pesos in overdue obligations.Because of this, he was considered as one of the radical chairmen the DBP ever had.On July 14, 1976, Chairman Virata passed away in Houston, Texas, where he wastreated of a lingering illness, leaving his wife the former Marie Theresa “Bebe”Lammoglia, and two children, Luis and Giovanna.JV de Ocampo assumed Virata’s unfinished term at the DBP. In honoring Virata,Chairman de Ocampo said: “In the death of Chairman Leonides Virata, we have lost an esteemed leader in the country’s economic life. He was a force in our development direction…. Chairman Virata was an articulate exponent of an economic strategydesigned to improve the quality of life of our people and he gave of himself liberally to this pursuits toward the end. Shortly before his death, he sought to give deeper and massive meaning to the DBP’s countryside development program which he himself initiated in line with national policy.”In recognition of his “long and distinguished service to the country in the fields of banking, finance, trade and industry, which spanned a period of 33 years,” PresidentMarcos posthumously conferred on him the Presidential Merit Medal.